The End of World War II in Europe

Parisians march through the Arc de Triomphe waving flags of the Allied Nations to celebrate the end of World War II – May 8, 1945. German military leaders had signed an unconditional surrender in Reims, France, on May 7. (AP Photo)

REIMS, France  — World War II ended in a French schoolhouse 75 years ago when German commanders signed their surrender to Allied forces. Unlike the massive celebrations greeting the momentous news in 1945, today’s surviving veterans quietly marked V-E Day with private memories, confined by a global pandemic, and without usual fanfare of public honor.  Regardless, the world’s undying gratitude for their service and sacrifice remains eternal. 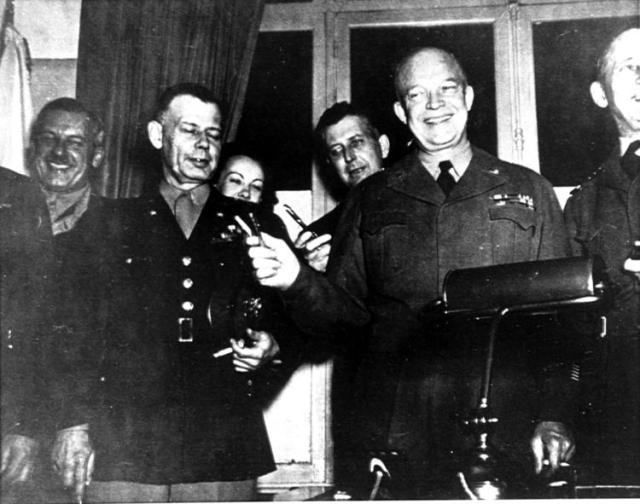 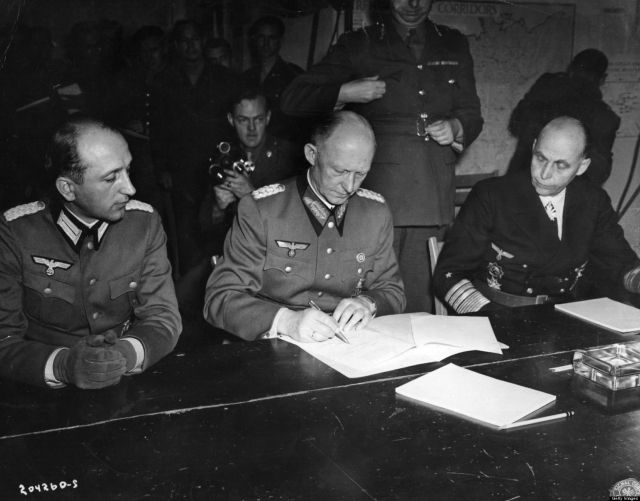 Germany surrendered unconditionally to the Western Allies and the Soviet Union at 2:41 a.m. French time.  It took place in the headquarters of Gen. Dwight D. Eisenhower and was signed for Germany by Col. Gen. Alfred Jodl, new Chief of Staff of the German Army.   The surrender was signed for the Supreme Allied Command by Lt. Gen. Walter Beddel Smith, Chief of Staff for Gen. Eisenhower. Also participants in the signings were Gen. Ivan Susloparov of the Soviet Union and Gen. Francois Sevez for France.

Gen. Eisenhower was not present at the signing, but immediately afterward Gen. Jodl and his fellow delegate Gen. Adm. Hans Georg Friedeburg were received by the supreme commander.   Asked sternly if they understood the surrender terms imposed upon Germany, and whether they intended to carry them out, their response was confirmed.  Elation at the news was tempered by the realization that the war against Japan remained unresolved.

The end of the European warfare, the greatest, bloodiest, and costliest war in human history — claiming at least 40 million casualties on both sides of killed, wounded and captured — resulted after five years, eight months and six days of conflict which circled the globe.

Germany, beginning the war with a ruthless attack upon Poland on September 1, 1939 and following with successive aggression and brutality in concentration camps, later surrendered with an appeal to the victors for mercy toward the German people and armed forces.

After having signed the full surrender, Gen. Jodl requested leave to speak and received leave to do so. “With this signature,” he said in soft-spoken German, “The German people and armed forces are for better or worse delivered into the victors’ hands. “In this war of more than five years, both countries have achieved and suffered more than perhaps any other people in the world.”

On May 8, 1945, President Harry S. Truman addressed the nation that Allied Armies have won unconditional surrender from the German forces on all fronts and the flags of freedom fly over Europe., although the war with Japan remains unresolved. (AP Photo/stf)

President Harry S. Truman smiles happily as he announces to the press the complete victory of the Allies over Germany, during a ceremony at the White House in Washington, D.C., May 8, 1945.

People crowd into the street outside the U.S. and British Embassies in Lisbon, Portugal, on VE-Day.
Jubilant crowds celebrated for two days and nights.
May 8, 1945 (AP Photo)

The great bells of St. Peter’s Basilica rang out over Rome soon after the Associated Press reported peace had come to Europe, while several Allied capitals proclaimed VE holidays, and Tokyo announced continuation of “The Sacred War.”

Many of the world’s cities went wild at the news, and even neutral capitals were bedecked and filled with celebrating crowds. Masses of people gathered in front of loudspeakers and newspaper offices, which were frantically answering inquiries and rolling out extras.

War-scarred London burst into jubilant celebration at the end of the war in Europe, its millions of citizens unable to wait for the government’s V-E Day proclamation. Millions surged into the streets, from Buckingham Palace to the sedate East End. The Picadilly Circus, Whitehall and Westminster areas filled with a laughing, shouting throng. Some old-timers said the scene eclipsed those of the 1918 Armistice.  Pubs were jammed, Champagne was brought up from deep cellars and long-hoarded whisky and gin came out from hiding.  The great bells of Big Ben tolled the hours of the historic day.

In Paris, which lived through four years of German occupation to become a base for Supreme Allied Headquarters, the French government announced a two-day holiday. France had special cause for satisfaction in having staged a comeback and won the right to share in accepting Germany’s surrender.

In Washington, crowds gathered in Lafayette Square across Pennsylvania Avenue from the White House in anticipation of an announcement by President Truman to proclaim Allied V-E Day.

Historic photos capture the joy that erupted throughout Allied countries after Nazi Germany surrendered in the spring of 1945, ending the horror of World War II in Europe. 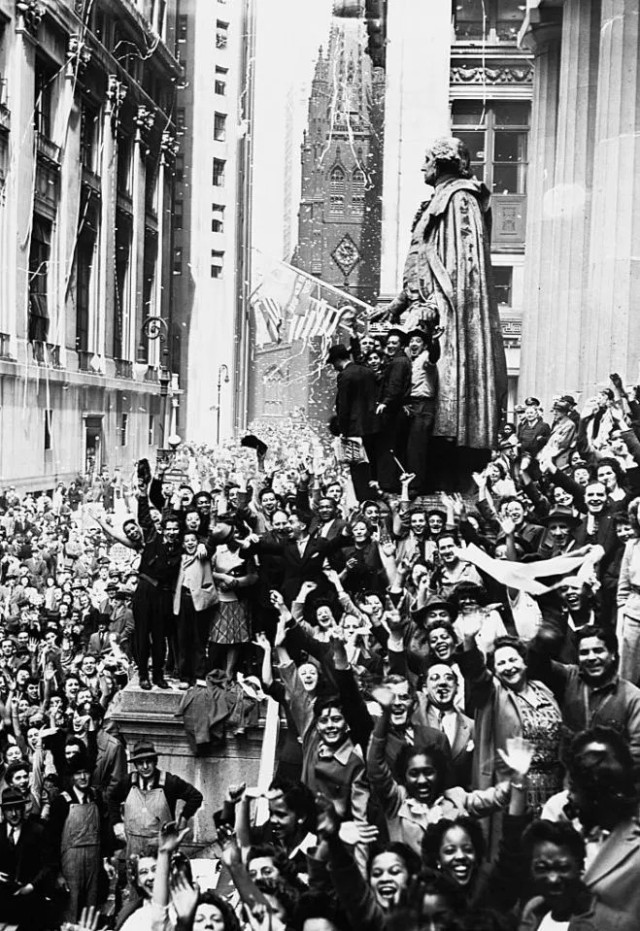 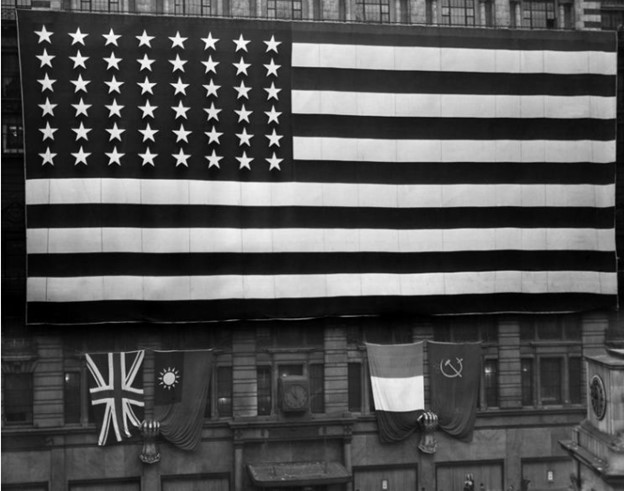 A huge American flag unfurled in New York’s Herald Square on VE Day, May 8, 1945. This 80×160 foot flag was hung from the eighth floor balcony of Macy’s New York department store, covering the façade from 34th and 35th Streets along Broadway. (AP Photo)

A group watches from the top of Paris’s Arc de Triomphe as crowds gather on VE Day May 8, 1945

A spontaneous parade of Parisians marches through the streets of the French capital on May 8, 1945. 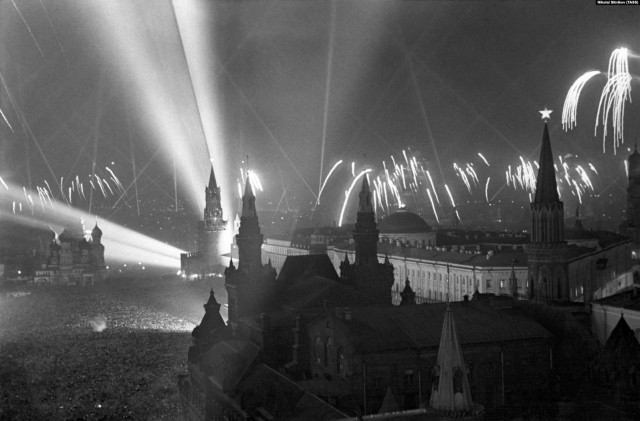 Moscow’s Red Square, packed with people as fireworks explode around the Kremlin. One man who was there later told Russian media “Strangers kissed each other. I don’t remember such a unity of people as it was on May 9, 1945; we were all one and the same — Russians, Tatars, Uzbeks, and Georgians — we were all united as never before.” 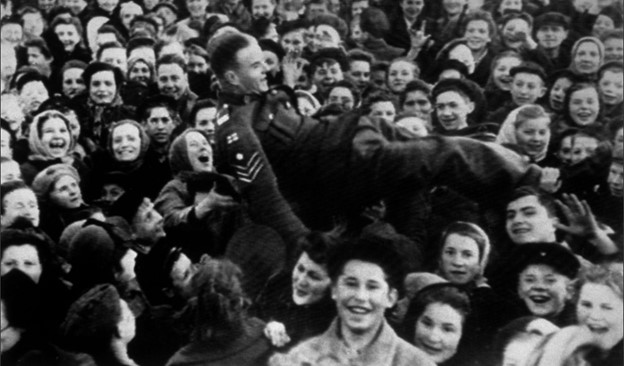 A British sergeant is thrown into the air by a crowd of youngsters in Moscow. The Soviet Union celebrated Victory in Europe one day after most Allied countries, as Germany’s high command signed a second surrender document demanded by Josef Stalin, late on May 8, 1945.

A packed pickup rolls through London. A witness to the giant party described an infectious atmosphere that “combusted spontaneously” from the smallest to the oldest with revellers passing through the Strand in London, England. May 8, 1945

Churchill waves to crowds in Whitehall on the day he broadcast
to the nation the war against Germany had been won.
8 May 1945 (VE Day)

St. Paul’s Cathedral, one of the buildings that survived the wartime blitzes, is shown at night in floodlighting for the first time in nearly six years as a symbol of victory on V-E Day.
London, England,
May 8, 1945. (AP Photo)

Only in the unnatural calm of the European fronts was the news reported to have been taken soberly, by soldiers who had seen the fighting taper off in one sector after another for the past two weeks. 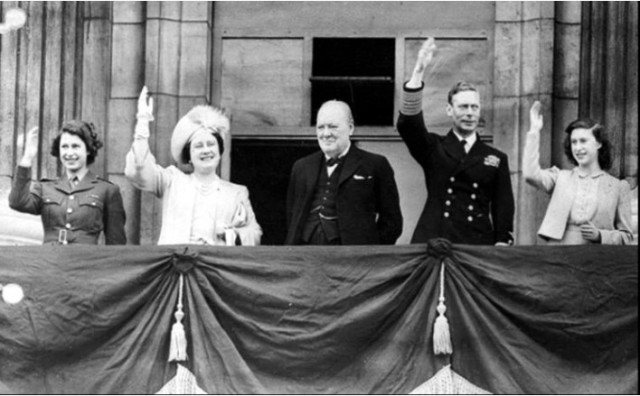 In this May 8, 1945 file photo a vast crowd assembles in front of Buckingham Palace, London to cheer Britain’s Royal family as they come out on the balcony, centre, minutes after the official announcement of Germany’s unconditional surrender in World War II. They are from left: Princess Elizabeth; Queen Elizabeth; King George VI; and Princess Margaret. Nazi commanders signed their surrender to Allied forces in a French schoolhouse 75 years ago this week, ending World War II in Europe and the Holocaust.

A vast crowd assembles in front of Buckingham Palace, London to cheer Britain’s Royal family just minutes after the official announcement of Germany’s unconditional surrender in World War II. They are from left: Princess Elizabeth; Queen Elizabeth; King George VI; and Princess Margaret. Nazi commanders signed their surrender to Allied forces in ending World War II and the Holocaust.  May 8, 1945

“Never in the field of human conflict
was so much owed by so many to so few.”