A rare D-Day “clicker” security device used by British and American Paratroopers
landing on Normandy during the evening of June 5 and early hours of June 6, 1944.
Located in Birmingham in time to mark the 75th Anniversary of D-Day in tribute.
Photo courtesy of ACME Whistles, manufacturer in WWII

In a desperate bid to retrieve a missing part of history from June 6, 1944, a campaign was launched to mark the 75th Anniversary of D-Day and the veterans who served and were likely saved by it.  A top secret security device used by British and American paratroopers in evading German forces behind enemy lines, an original “clicker” had not been seen since WWII.  Upon parachuting into Normandy in 1944, paratroopers were ordered to use the device only for the initial 24 hour period and discard thereafter to prevent falling into German hands.

How We Found The Lost ACME Clicker

Earlier this month we launched a campaign to find the “Lost D-Day Clickers” produced by ACME Whistles for use by the 101st American Airborne Division in June 1944.  Their purpose at the time of manufacture was kept top secret but later became evident that these clickers, which we produced in complete secrecy, were a vital piece of survival equipment for the heroic paratroopers involved in the famous D-Day Landings during World War II.

We have been delighted with the incredible coverage that the “Search For The Lost Clickers” campaign has had and we’d like to take a moment here to say a very sincere Thank You to everyone who helped to spread the word about the campaign. We even had the opportunity to appear on BBC News.

As a result of the campaign’s coverage, we are overjoyed to be able to reveal that we have been successful in our attempts to locate one of these lost pieces of significant military history.  To our amazement, we found a clicker located in Birmingham, just a short drive from the ACME Whistles factory!

The clicker was found by Diarmid and Liz who discovered it amongst the collection of military items kept by Liz’s father, Captain Geoffrey Kemp Bond (1906 -1997).  Speaking about the significant find, they said: “Whilst sorting through Liz’s father’s collections, we came across the clicker and realised what it was.  However, until we read the news about ACME’s ‘Search for the Lost Clickers’ – we hadn’t realised how rare they were,” said Diarmid.  “It’s great to help save this little part of history for others to enjoy.”

After investigation of other items from the same period in Geoffrey’s collections, Liz and her family were able to place their father in the Normandy region at the time of the D-Day Landings – thanks to notes and memoirs he wrote during the war.  Although there is no direct reference to the clicker within his writings, or any indication of how it came into his possession, it clearly indicates Geoffrey arrived in Normandy and was working on the vehicle staging areas during that time. 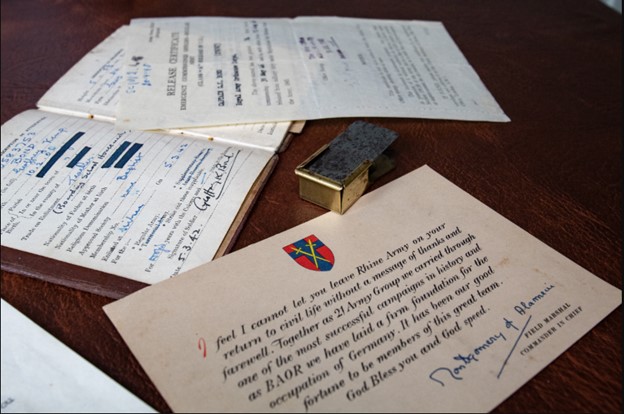 Our objective at the start of this campaign was to honor the memories of all the brave heroes who fought in World War II as part of the D-Day 75 commemorations by attempting to preserve an extremely rare piece of D-Day history.  Thanks to Diarmid and Liz reading about our campaign and reaching out to us, we are now extremely proud to be able to say that one of the few remaining original clickers has found its way back to its factory birthplace and is now part of an ACME Whistles display at our headquarters in Birmingham.

“During the war, the order to produce 7000 clickers would have been Top Secret, so we wouldn’t have been allowed to keep a clicker even if we had wanted to. Therefore, to commemorate the 75th anniversary of D-Day, we put out a search around the world from Europe to America to try and find an original clicker to ensure this part of D-Day history could be kept.  Little did we know that we’d find one so close to the factory in Birmingham!” 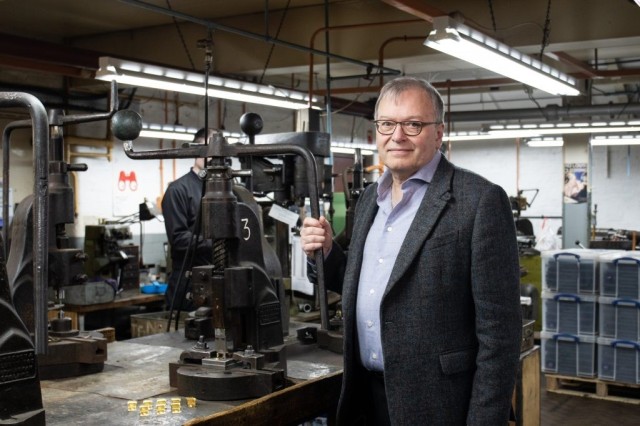 “My father was an avid collector and interested in history.  Stamps were his thing but keeping these military items would have appealed with the view of saving a piece of history.   I think the clicker now being displayed back at the factory where it was made would have really put a smile on his face.”

Acme 470 clicker used during the D-Day landings by British and American paratroopers in 1944,
as a means of communicating with allied troops.

Geoffrey Kemp Bond was a schoolmaster at the Royal Masonic Junior School, Bushey, Watford, Hertfordshire prior to being called up for service and went into the Royal Army Ordnance Corps and reported to the Hillsea Barracks, Portsmouth as Private 10583753 in the Spring of 1942.  He was originally due to be called up in 1941 but unfortunately broke his ankle very badly playing football with the schoolboys and when call-up did come, which would have been for the North Africa campaign, he was deferred for another year. When he did join up he was amongst the oldest of the recruits and from March to May went to various companies and training camps including Woollaton Park, Nottingham.

In July 1942 he was sent to Chilwell where the job he was given was “chasing” i.e. finding spares and items needed urgently by Military Transport.  This is where he gained a wide-ranging knowledge of all the vehicles being built and developed.  He then applied for a commission and was transferred to Bicester. There he was trained in all aspects of ordnance procedures – organisation – branches – paperwork and weapons and mock attacks and so on.  He passed and was sent to Officer Training School at Repton where he received his commission as a Lieutenant.

He was allocated to Armoured Fighting Vehicle Park divided into A tracked vehicles and B wheeled vehicles – he went into A at this stage and in particular Troop Carriers.  It became clear that they were being prepared for the long awaited ‘Second Front’. During this period, he went to Chilwell, Handforth (Cheshire), Craven Arms (waterproofing course – BOSTIK and high steel plates fitted to the sides of vehicles) and a mock battle practice in North Wales. 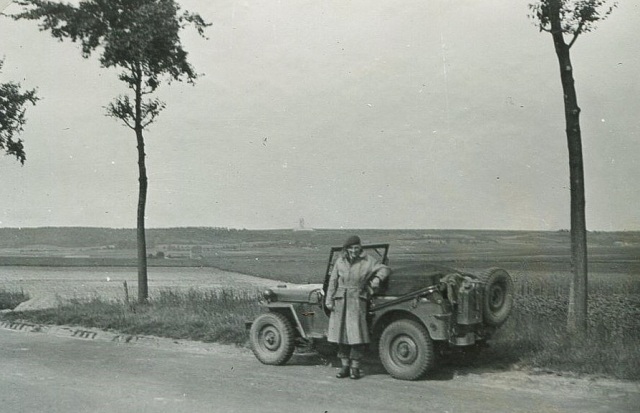 The unit had all its carriers they expected instinctively to move South, but went to Walton-on-the-Naze for a week (possibly to back up the false rumours of the invasion being in Norway).  They were still there when the invasion in Normandy began.  After this they were embarked onto a tramp ship at Tilbury to go down the Thames Estuary, through the Dover Straits, and across to the landing beaches.  They arrived on about D+8 and he described what he saw as “the biggest jungle of shipping you can imagine”.

They were kept lying at anchor for 2 days before being ordered ashore and told to contact 17 Vehicle Park.  It was late in the day when the company of 6 carriers started the slow crawl up the beach where they lined up and stripped off the BOSTIK to stop the engines overheating.  He had to wait overnight as he had no instructions where the Vehicle Park was, and the Beach Master had gone off for the night. The next morning they were instructed to go to Bayeux and then turn back to the village of Vaux-sur-Aure where 4 Vehicle Park was to be set up in fields with high hedges and wide dry ditches around them. They could hear the battle for Tilly a few miles away. The REME mechanics prepared the carriers immediately and sent them off loaded with infantrymen to the front.

The Vehicle Park was set up in this field with vehicles as they arrived from the beaches parked down one side and the cookhouse and sleeping tents – set up in the wide ditch – down the other side.  They could hear the battle for Tilly getting louder and quieter as it raged on.

Lt Bond’s routine was to go in a Utility vehicle (Tilly for short) and a couple of 3 tonners with drivers to fields near the sea each morning where carriers had been landed and the men drove the carriers back. He observed the Mulberry Harbour being built day by day until the vehicles were able to be driven over pontoon roadways to shore.  He described the traffic as being enormous and that a bypass was being built round Bayeux to move the traffic through quickly.  He remembers seeing Monty in the main street in Bayeux driving past in an open Staff Car, acknowledging everyone’s salutes with a grin!

Bond was then transferred to B Vehicle Park on the other side of Vaux-sur-Aure and found himself in charge of older men who had been called up from driving lorries and trucks to do the same in France.  He was there through to October.

Geoffrey was later sent on behind the army to a vehicle park in Woluwe, Brussels.  By the time of the surrender to mark the end of the war, Bond was a Captain and in charge of a MT depot in Twistringen.  This involved searching out the dumps of German equipment all over the countryside and storing them together in the MT depot. After demobilisation in 1946, Geoffrey returned to teaching and eventually became a headmaster.

Captain Geoffrey Kemp Bond, pictured in the middle of the back row.

The small metal life-saving tool was used by troops at Normandy in attempt to determine whether among friend or foe in pitch black conditions.  Every paratrooper was issued a clicker and, upon being dropped into darkness on the eve of D-Day, were told to utilize if suspecting someone was near.  (On the night of the invasion, only approximately 15% of paratroopers landed in the right location and clearly at a disadvantage.)  They were instructed to click once and, if heard two clicks in reply, that meant friend. No response meant something else, Simon Topman noted.

General Maxwell D. Taylor, commander of the American 101st Airborne Division at Normandy, introduced the use of the “cricket” in 1944 for the 101st and would soon discover first hand its value.

“I had my pistol in one hand, my ‘cricket’ in the other… I crept along the hedgerow looking for a gate.  Just as I found it, I heard a stir on the other side.  I drew my pistol and got all set.  Then I heard the click.  That was the most pleasant sound I ever heard in the entire war.” ~ General Maxwell D. Taylor, Commander of the 101st Airborne Division.

The “crickets” have since become iconic symbols of the U.S. airborne brotherhood and indeed D-Day itself.

The Managing Director at ACME Whistles said the quiet noise created by the clickers was the “original sound of D-Day” and was a hugely important tool for soldiers to find allies in unfamiliar conditions.  The ACME Whistles Birmingham-based factory was given the “top secret” task of making 7,000 clickers, six months prior to D-Day.

From the air — US and allied paratroopers parachuted onto the beach and deep into enemy German territory on D-Day and in support of the massive military invasion by land, sea, air. World War II combat photos

This British History once again Marks its Valued Contribution to Allies

in Honoring the 75th Anniversary of D-Day