Following the Japanese attack on Pearl Harbor in December of 1941, the Sullivan brothers enlisted in the U.S. Navy, January 3, 1942, with the stipulation they serve together.  All five brothers, in accordance with their wishes, were assigned to the light cruiser, the USS Juneau.  Although Naval policy addressed the separation of siblings, it was not strictly enforced.  This consideration by the Navy would become a defining moment in their lives.

Beginning in August 1942, the Juneau participated in a number of naval engagements during the lengthy Guadalcanal campaign and the first major Allied offensive in the Pacific theater.  Months later, in the early morning of November 13th, the Juneau would be struck by a Japanese torpedo and forced to withdraw.  Later that day, leaving the Solomon Islands for the Allied base at Espiritu Santo with other surviving U.S. warships, the Juneau was struck again with a second torpedo.  A thinly armored light cruiser, it was likely hit near the ammunition magazines and the ship exploded and quickly sank.

Captain Gilbert C. Hoover,  commanding officer of the light cruiser USS Helena and senior officer present in the battle-damaged U.S. task force, was skeptical anyone had survived the sinking of the Juneau.  Believing it reckless to search by exposing his wounded ships to a still-lurking Japanese submarine, his orders were to continue towards Espiritu Santo.  Helena then signaled a nearby U.S. B-17 bomber on patrol to notify Allied headquarters and send aircraft or ships to search for survivors.

In fact, approximately 100 of Juneau‘s crew, who had survived the torpedo attack and the sinking of their ship, were left in the water. The B-17 bomber crew, under orders not to break radio silence, failed to pass the message to headquarters until landing several hours later.  The crew’s report of the location of possible survivors was mixed with other pending paperwork actions and went unnoticed for several days.  It was then that headquarters realized a search had never been mounted and belatedly ordered aircraft to the area.  In the meantime, Juneau’s survivors, many of whom were seriously wounded, were exposed to the elements, hunger, thirst, and repeated shark attacks.

Eight days following the sinking, ten survivors were found by a PBY Catalina search aircraft and retrieved from the water.  The survivors reported Frank, Joe, and Matt died instantly, Al drowned the next day, and George survived several more before delirium and the loss of his brothers took its toll.  He went over the side of the raft he occupied and was never seen or heard again.

Security required the Navy keep the loss of Juneau and other ships as classified  to prevent information provided to the enemy.  With the sudden absence of wartime letters to home from the Sullivan brothers, their parents grew worried.  Alleta Sullivan would contact the Bureau of Naval Personnel in January 1943, citing rumors that survivors of the task force claimed all five sons were killed in action.

Her letter was answered by President Franklin D. Roosevelt on January 13, 1943, who acknowledged the Sullivan brothers were missing in action.  By then, however, the parents were already informed of their fate, having learned of their deaths on January 12th. That morning, the boys’ father, Tom, was preparing for work when three men in uniform – a Lieutenant Commander, a doctor, and Chief Petty Officer  – approached his door. “I have some news for you about your boys,” the naval officer said. “Which one?” asked Tom. “I’m sorry,” the officer replied. “All five.”

President Franklin D. Roosevelt in response to Alleta Sullivan
following the death of her sons
13 January, 1943

The brothers left a sister, Genevieve (1917–1975).  Al was survived by his wife Katherine Mary and son Jimmy.  Joe left a fiancée named Margaret Jaros, while Matt left behind a fiancée named Beatrice Imperato. The “Fighting Sullivan Brothers” would become national heroes and in addition to President Roosevelt’s letter of condolence to their parents, Pope Pius XII sent a silver religious medal and rosary with his message of regret. The Iowa Senate and House adopted a formal resolution of tribute to the Sullivan brothers of Waterloo.

In spite of their great personal loss, Tom and Alleta Sullivan continued their speaking appearances at defense plants and shipyards on behalf of war bonds and the war effort.  Alleta would later participate in the launching of USS The Sullivans, in honor of five  sons who became the ultimate symbol of heroic sacrifice for wartime America. 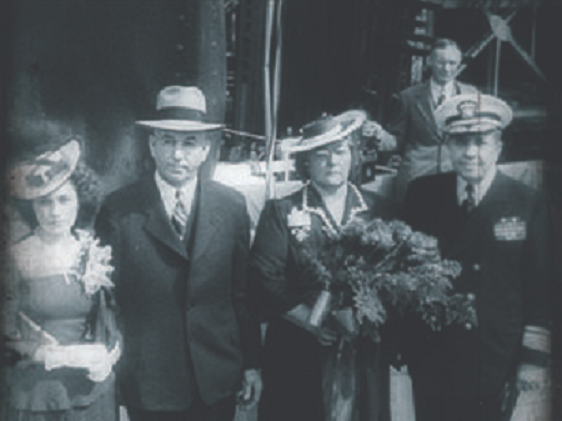 Alleta Sullivan stands with daughter Gen and husband Tom
at christening of the destroyer, USS The Sullivans
April , 1943

On March 17, 2018, the wreckage of the USS Juneau was discovered by Microsoft co-founder and philanthropist Paul Allen off the coast of the Solomon Island’s in the South Pacific.  In total, 687 men, including the five Sullivan brothers, were killed in action as a result of its sinking. 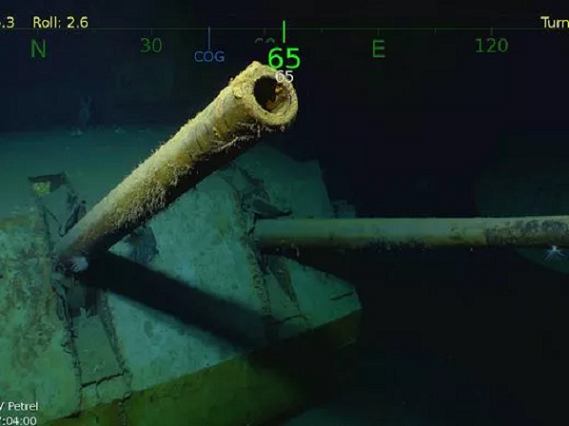 USS Juneau wreckage resting on the seafloor off the Solomon Islands of the South Pacific
Navigea, RV Petrel 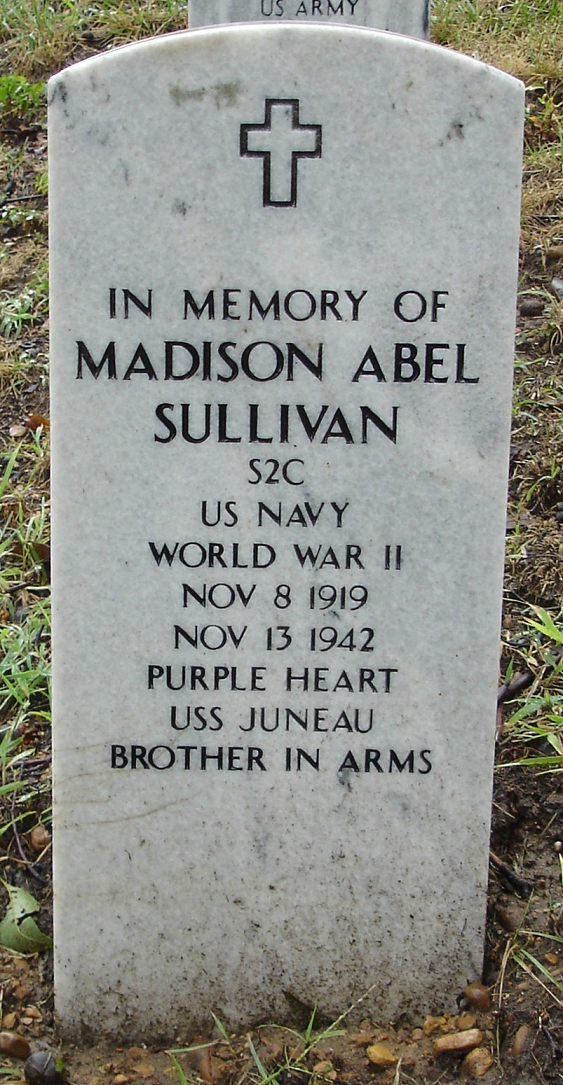 Eternal Reverence and Gratitude
For Your Sacrifice on Behalf of Freedom