An Inspiration to WWII Troops

Vera Lynn at 27 and already a celebrity who chose to travel 5000 miles
to Burma, during WWII in treacherous wartime conditions. to entertain the troops.

An inspiration who brought hope, happiness, and thoughts of home, if only briefly, to those who needed it most.

Vera Welch was born on 20 March 1917 in East Ham, London.  Neither of her parents were involved in show business – her father Bertram a plumber and mother Annie a dressmaker.  At the age of seven, however, the talented Vera was singing in clubs, an audience she described as “great,” and soon became the family’s main breadwinner.

When she turned 11, Vera took her grandmother’s maiden name of Lynn as a stage name. She had no formal singing lessons as a child and just one as an adult as her instructor felt she had nothing to offer her natural gift.

While singing, Vera’s talent was spotted at age 15 by local band leader Howard Baker.  He signed her on the spot and in 1936 at 19, she had her first solo record.

By the age of 22, she had sold more than a million records.  However, it was during World War II that her reputation was made.  She frequently sang to the troops at morale-boosting concerts, becoming known as “The Forces’ Sweetheart.”

Vera Lynn at 22 years of age

Vera’s wartime contribution began when she would sing to people using London’s tube- station platform shelters during air raids.  Between 1937 and 1940, she also toured with the aristocrat of British dance bands, Bert Ambrose, as part of the Ambrose Octet.  The group appeared in broadcasts for the BBC and for Radio Luxembourg prior to her leaving Ambrose in 1941.  She would then spend countless visits servicing the war effort wherever she could. 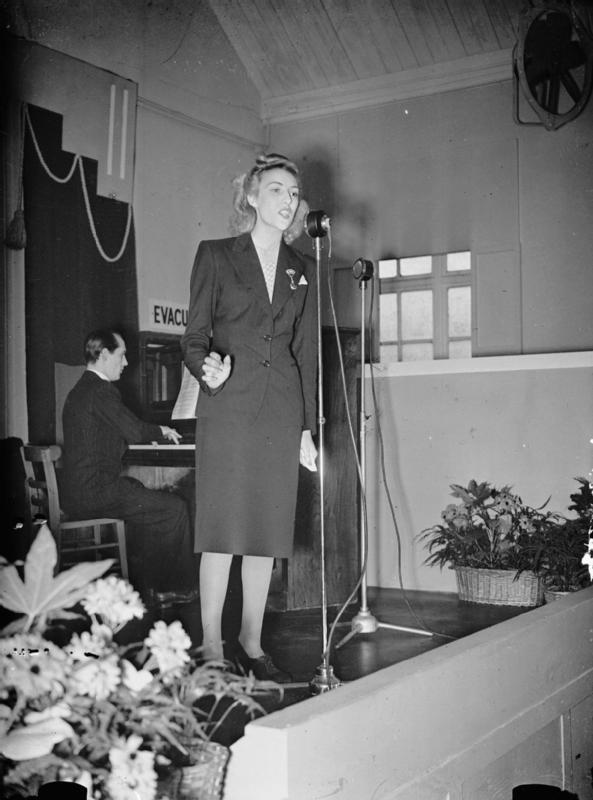 Lynn sings at a munitions factory in wartime Britain, early 1941.

Lynn is forever best known for the popular song “We’ll Meet Again” which she first recorded in 1939 and later again in 1953 accompanied by servicemen from the British Armed Forces. The nostalgic lyrics (“We’ll meet again, don’t know where, don’t know when, but I know we’ll meet again some sunny day”) were very popular during the war and made the song one of its emblematic hits.

British singer Vera Lynn receives a grand welcome as she arrives in Trafalgar Square, London,
to sing during the ‘Salvage Week’ campaign in 1943.
Getty Images

Her continuing popularity was ensured by the success of her radio program “Sincerely Yours,” which began with messages to British troops serving abroad.  In continuing to perform songs most requested by the soldiers, her other great wartime hit was “The White Cliffs of Dover” in 1943.

Vera Lynn’s portrait would be later projected onto the White Cliffs of Dover
to celebrate her 100th birthday and namesake song of WWII.

Vera Lynn is pictured with troops in Burma, 1944.
She received a rapturous reception from soldiers fighting there.

Vera Lynn, already a celebrity, had just turned 27 when she set out from the Dorset coast with her pianist, Len Edwards, and a small piano in March 1944.

Frederick Weedman, who heard her in Burma, remembered: ‘The men of the 4th Brigade were divided in their opinion of her voice — but not after that hot, steamy evening in 1944 in the Burmese jungle, when we stood in our hundreds and watched a tall, fair-haired girl walk on to a makeshift stage and stand by an old piano.  It was Vera Lynn. She sang half a dozen songs in a strong, clear voice.

Vera recalled it ‘was impossible for me to be impassive’ when she saw ‘happiness, hope and sadness move across their faces and I felt those emotions, too.’

‘She tried to leave the stage but the men were clapping and cheering. She sang three more songs but still they went on cheering. She started to sing again but whenever she tried to stop, they yelled the name of another tune. ‘She sang, until her voice had become a croak and was the only star we ever saw in the jungle.’

Lance Corporal Lindsay wrote from Burma to his sister in London: ‘We went mad. Never have I yelled, bellowed, hollered or clapped so much before . . . we gave her an ovation, all right.  She couldn’t sing for ten minutes and she cried, too.

‘Broken hand or not, I made it clap . . . I saw blokes crying with joy at seeing our own Vera.’

Vera living on tour with the troops in the most modest circumstances.

In Burma itself, the intense heat was punishing and young Vera also had to cope with insects, humidity, monsoons, lack of facilities and sheer exhaustion.

Vera insisted on visiting wounded soldiers in hospitals, making sure she toured every ward, sat on every bed and chatted to every patient.

Vera Lynn in her ENSA uniform. She arrived back in Britain on D-Day
from what she said was a life shaping experience in Burma

In March 1944, she went to Shamshernagar airfield in Bengalto to entertain the troops before the Battle of Kohima.  Her host and lifelong friend Captain Bernard Holden  recalled “her courage and her contribution to morale.”  In 1985, she received the  Burma Star for entertaining British guerrilla units in Japanese-occupied Burma.

She remained popular following the war, appearing on radio and television in the United Kingdom and the United States, and recording her hits.

Lynn devoted much time and energy to charity work connected with ex-servicemen, and was held in great affection by Second World War veterans.  In 2000, she was named the Briton who best exemplified the spirit of the 20th century.

Vera Lynn with ex-servicemen at a post-war garden party in 1950 at Buckingham Palace. 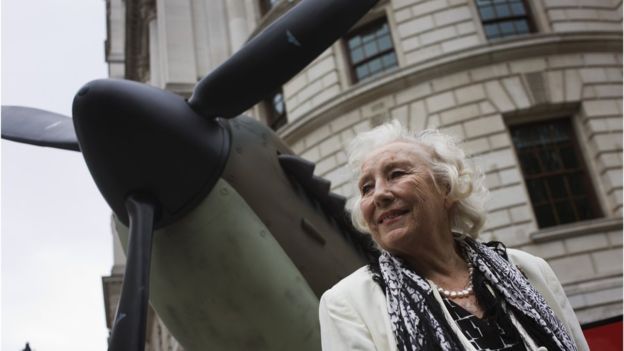 Vera Lynn helped mark the 70th Anniversary of the Battle of Britain at the age of 93.
10 August 2010

Vera Lynn continued all her life to dedicate herself to veterans.  Her daughter said fan letters continued to arrive from all over the world, sometimes simply addressed to “Vera Lynn, UK.”

In Devoted Inspiration
To Troops During WWII

A Voice of Hope to Wartime Britain

4 Responses to An Inspiration to WWII Troops